'Houdini' kitten rescued from three vehicles in one day in Norfolk 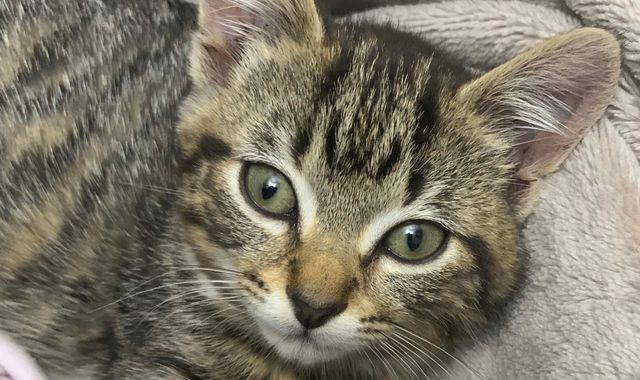 A kitten had to be rescued from three vehicles in one day after it kept climbing into engines in Norfolk.

Rescuers had to partially dismantle each of the vehicles, with the whole operation lasting several hours in the town of King's Lynn.

The RSPCA was called to a car park when a member of the public heard a cat crying from a Volkswagen Golf.

With the permission of the car's owner, firefighters lifted it up to try and free the cat.

It was then taken to a garage where some of the wheels and bodywork were taken off to reach the cat underneath the engine.

But before it could be captured, the cat escaped and ran under a BMW and did the same.

The BMW's owner was traced and the car was partially taken apart, but the cat then dashed under the RSPCA van.

The van required less dismantling since it was higher from the ground and a firefighter managed to catch the cat in his arms before she could escape again.

RSPCA animal collection officer Natalie Read, who has since adopted the cat, said: "This kitten was proving a little Houdini - but there's no way we could leave her in any of the vehicles or alone in the middle of a busy town centre, so we just had to try again!"

Her colleague Naemi Kilby said: "The kitten was so terrified by what had happened - we had to get her - because she could have been seriously hurt or killed if she had been inside a car engine for too long while moving."

The kitten is believed to be between six and 12 weeks old and has been named Lohse.

The RSCPA said it is likely the cat travelled to the car park in another vehicle from a farm 10 miles away.

More from And finally...

Get more with the Listener Club!